We don't buy DVDs any more and CDs are probably something your parents have on a shelf somewhere.

It's also easier to buy video games online than physical copies now, through consoles or PC services like Steam.

But what about the consoles - could those disappear too? Google certainly thinks so.

The tech giant is launching gaming service Stadia on Tuesday, which allows gamers to jump into the latest titles with little more than a decent broadband connection and a Google Chrome browser.

But Google doesn't think Stadia is that big of a leap forward.

'We're not the only ones thinking about this'

And he believes Google will be just the first of many companies who ditch consoles and discs forever, and make the switch to a browser-led game streaming service.

"I don't claim that this innovation is going to change the world overnight," he adds.

"But I think this is the direction of travel and that this will be a very strong future for the games industry to create these kind of streaming experiences.

"We're not the only ones thinking about this."

Instead, gamers can access the service to pay for games which they then stream through an integrated YouTube service - it's just the consoles that the service would be getting rid of.

But they're taking on Microsoft's Xbox, Sony's PlayStation and Nintendo, the three big names in gaming which have millions of loyal followers.

Phil says Google wants to move gaming "away from being about a box in plastic underneath your TV" - and that Google's experience in tech makes it a suitable rival.

"We're not coming at this cold," he says.

"We've built Stadia on the back of more than 15, nearly 20 years now of data centre and internet innovation at Google."

Phil suggests gamers will feel the benefit of Stadia most in their wallets, claiming it will be a cheaper way to play the latest games without having to buy the latest graphics cards for a PC or new consoles.

"It allows more gamers to have access to more of the latest, greatest games without the need for these complicated, expensive pieces of hardware - which, let's not forget, also require updates, download patches, installs.

"All this nonsense that goes around games will just go away."

Phil says the game he's enjoyed most on Stadia so far is Destiny 2, but it's titles like Red Dead Redemption that really showcase what the service can do. 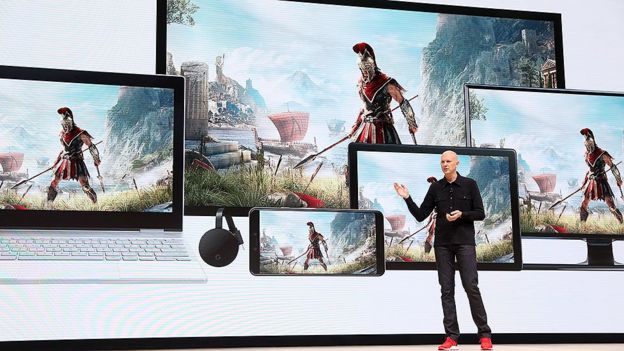 "When you get the chance to play a game of the sophistication of Red Dead Redemption 2 on a phone streaming over the internet and it's pixel perfect - that is one of those great moments in the industry where you see that this is a leap forward."

Not everyone is convinced the transition to streaming games will happen with the launch of Stadia though.

"My view is we're all in the testing phase," head of Xbox Phil Spencer told BBC Click. "We're early in this technology and we feel it will take many years before this technology becomes mainstream.

"The best place for you to play will be on your local device, your console, your Xbox connected to your TV and that'll be true for many years."